I’ve previously examined my ‘top 5’ in a number of posts, but as that was now 6 years ago, I thought I’d revisit the list and see both whether they still make it or not (see http://demonground.livejournal.com/60266.html as a good start for these posts).

Setting that could have better systems -

Systems I love but could have better settings –

I’m sure there are other games that could fit in these categories, but let’s just leave this here shall we…

So, I've come to the conclusion that I much prefer 'Roll Under' mechanics in RPGs than 'Roll Over'. In otherwords, I feel more comfortable with rolling under a set number (be it skill, skill+attitude, etc.) rather than trying to be a target number set by the GM by rolling the die and adding bonuses).

I don't actually know why this is, but it feels much easier to control as a GM and, to me at least, seems much less arbitary. Maybe this is due to all the Skype gaming I'm doing at the moment?

Although I've been a wargamer for as long as I've roleplayed, I've never really got the hang of painting miniatures. For me the game is on the table, not the wider collecting, painting and design hobby. I suppose the main reason this is so, is due to my general inability to actually paint, a fact that has frustrated me on numerous occassions.

However, just recently, I discovered a you tube video that demonstrated a painting technique that almost exclusively uses ink washes. Washes are very forgiving on technique, especially for an unsteady hand like mine. Intrigued, I dragged out a collection of old miniatures I had in a draw (these are 20 years plus old), and thought I'd try my had at this style of painting.

These were the results... 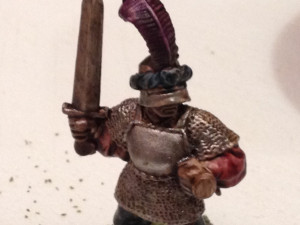 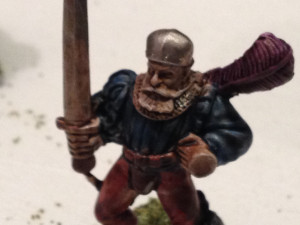 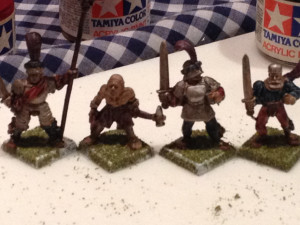 To be honest they are a little 'washedout', and I'm going to try another set of 4 without a dark wash over the white base coat, but other than that this has to be the best painting job I've ever done!

Believe it or not, there might be hope for an old bloke like me! Who would have thunk it!

Tonight I kick-off session one of the second playtest of my Lurker in the Labyrinth mini-campaign for Call of Cthulhu. As I was saying to my players, it is exciting to have a story moving out of its more typical alpha state (which is where they normally bog down), into beta - where the gaps are being filled in and the focus is more on the story rather than the just the mystery's structure.

This story, Lurker in the Labyrinth (or LitL), first came to me back in 2007, shortly after I came down to Wellington. At the time I was working on finishing up Monophobia and with the long commute was able to start throwing around other Call of Cthulhu scenario ideas. At the time, the core ideas of LitL formed very quickly, and interestingly most of them remain the same today.

Given my stop/start nature of writing, I can't guarantee a completion date, but I'm just happy that something is happening!

More Cthulhu gaming - two games over Skype, and tomorrow I have D&D.

Skipped Mice & Mystics due to naughty children... but that gave me time to work on FPI instead!

Have claimed a couple of KS rewards also this week, with a Hardcover copy of River of Heaven on its way (someone please tell me why it is cheaper to ship directly from DrivethruRPG than via the YouPost service?). From ebay, I also have a copy of the NWoD core book on the way (at $5 who could say no?) and finally a copy of Stormbringer 3rd edition (again at a bargain basement price!).

Really in the mood to run a Sundered Skies game, but the chances of me ever finding an interested group locally are next to none (yes that is a request to anyone who might still read this journal :P)

The madness continues with sessions of D&D, Call of Cthulhu, games of Bushido and even a pre-campaign chat in the mix.

On top of this I've written a couple of other bits of work that will appear here and there on the internet, and have had a bolt of inspiration for another gaming idea...

A busy week just past for the Bone household, at least in the world of gaming. D&D on Thursday night and Mice & Mystics with the boys on Friday night. This coming week it gets even more hectic with Tuesday wargaming, Thursday D&D and somewhere thereabouts another episode of Mice and Mystics!

It's got so busy that I'm going to have to postpone my skype session with the Auckland group!

After a pretty slow start to 2015, and an unsatisfying Kapcon, I have the bulk of my gaming sorted out for the first six months of the year.

So much for my semi-retirement from gaming!

I never do this, but I thought I'd put up a little work of fiction I wrote back in 09...

I remember when I was young, living on the coast. The sunny days seemed to last an eternity back then and the nights no more than a blink of an eye. That was the time to be here!
Sometimes I wonder if every generation thinks this way – how much simpler it was before you really grew up and learnt about the world? Back then Paraparaumu was little more than a holiday home for the rich and retiring; a place where those with enough money, and foresight, invested in a nest-egg.
At the time my old dad was lucky enough to find a job here, working as a builder at first and a developer later – at least when the market was good. And when it wasn’t, well he and Mum weren’t going to give up their slice of paradise to return to the rat-race in Wellington.
That decision was a godsend for a kid like me. The coast was an adventure just waiting to happen, what, with the stretching sands, reaching mountains and endless waterways. Me and my ever rotating list of best mates couldn’t wait to head off early each morning, only to straggle back at dusk. If fact, with the number of sheer acts of stupidly we found ourselves getting into, I’m surprised that not one of us ended up dead. Even as we got older and the city got closer, it was always great to get way to the sand and surf.
Yet the good times can last so long and eventually everyone moved on. To study or work in the very city we all swore we’d never live in, to be closer to the night life, or in one case to get away from a few bad childhood memories. Hell, even Mum and Dad moved on in the end…
But I remained. Sure, I could have gone too. But the lure of power, fame or fortune never did have the same effect on me as it did my friends. Up here, on the quiet coast, I even found a soul mate and began my own family. (I have to laugh, as that’s yet another childhood promise broken.)
Today when I look at my kids, the youngest now starting school, I can’t help but think how much bigger and scarier the world must seem to them, and just what’s happened to the sleepy little town I once loved. Even as the new decade approaches, and there’s talk of more development and more roads hereabouts, I always think back to how much simpler my life was… when I was young.
Aaron Boardley, April 10th, 2059

I guess the title says it all, and if it isn't obvious the story is about how everyone reflects on their youth in an idealic way. I'm sure we all do it, and I just wanted to express that in my own way.

My plan this week is to complete one of the many (many, many, many) half-written rpg 'supplements' I have sitting on my Portable Harddrive.

As such, I'm going to update my blog each day with exactly how much progress I make. This is really more for my own motivation than it is anything else...
Collapse